The Sri Mayurapathy Murugan Temple Berlin, based in the capital of Germany, belongs to the few Hindu temples in the western hemisphere. The temple was constructed by nine Sri Lankan Tamils in the year 1991 – as a place to offer safety to the needy, listen to the prayers of the believers, to cleanse them of their sins and bless them. The inauguration of the temple was celebrated in a religious ceremony, the Kumbabishekam, under the guidance of Hindu high priest Siva Sri Parameswara Gurukkal.

At the same time, an assembly consisting of 200 members was founded, known to this day under the name Berlin Hindu Mahasabai e.V.. 11 members from this group are regularly voted to be part of the managing committee as dictated by German law.

The particularity of this committee lies in its election of the God Sri Mayurapathy Murugan as the chairman of the board. Hence they consider this God to be the leader of their temple and themselves only to be his 11 assistants. This makes sure that no one individual can claim a privileged position in the temple.

In order to monitor the actions of the committee, an additional supervisory board consisting of five members was installed. The supervisory board is elected every four years, while the term of office for the board only lasts two years.

Over time, thanks to the efforts of the board and the financial support of the Berlin population, the (small) facilities of the temple were bought and turned into a joint property.

Another particularity of this temple stems from its commitment as the only and first temple in the whole of Europe to stage – without exception – six poojas every day.

The most important time of year for the temple takes place in the month of August, in concordance with the relevant days of the native Nallur Tempel in Sri Lanka. On the 24th of these holy days, the God Sri Mayurapathy Murugan and his wives Valli and Deevaanai are led out of the temple on a theer (float) constructed especially for these means. The procession which follows goes around the block, while sung prayers and dances accompany the special rituals.

In the early years, for all these rituals and daily poojas, a high priest and a priest were flown in from Sri Lanka. As of now, these procedures are performed by priests from the neighboring country of our homeland, from India.

Over time, the yearning of the members of the assembly, of the Berlin populace and other believers to build a temple for the god Sri Mayurapathy Murugan based on the holy prescriptions grew large.

To achieve this, the members bought a property in Berlin Neukölln, Riesestr. 20-22/at the corner of Blaschkoallee on the 30th of May, 2008. The bhoomi pooja, the celebratory initiation of the building ground took place on the 22nd of June 2008 in attendance of all believers.

On the 4th of April 2009, the laying of the first stone was finally done in the presence of the mayor of Neukölln and several believers.

The new temple for our God has by now been erected thanks to his blessing and in spite of some hindrances. The building is equipped with a Gopuram that reaches into the sky and it boasts divine beings made of stones, which can also be found on the various altars (little ashrams).

Carpenters and stonemasons, who stand in the tradition of the stonemasons from Mahapalipuram, India, were flown in from India to work on the alters, the gopuram (gateway tower) and all doors and gates.

The construction of the temple was finished in summer/autumn of 2013. The long-awaited Kumbabhishekam (temple inauguration) could take place on the 8th of September 2013. For this, many Kumbams (vessels) carrying holy water were cast by the ayyars (priests) onto the Gopuram (gateway tower). Thus the temple was officially opened. Hundreds of believers took part in the ceremonies, making it a day to remember for all attendants.

In August 2014, the ayyars celebrated for the first time lent with the believers for almost a full month. In this time, on every day special poojas took place and the temple was full everytime during poojai time at 6 pm. At the end of the lent, the highest religious celebration, the wagon fest, took place with almost 400 to 500 believers in attendance.

It is also very graftifying that the loyal believers and other benefactors spend at least 10 Euro a month to the bank account mentioned below to support the temple.

These financial contributions are not only a big help, they also bring a certain stability to the temple and ensure its continued existence.

We take this opportunity to inform you that the story of our temple will continue and remain with best regards. 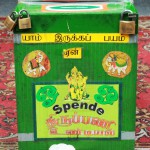